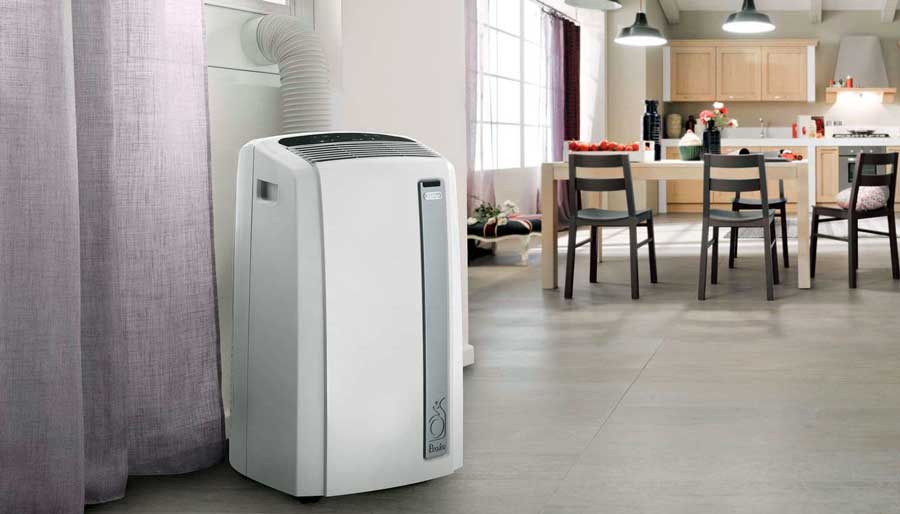 As gloomy as it often is in this country, once the annual headline grabbing “heatwave” does materialise I find it doesn’t take long to go from happy to “it’s too hot now”.

You really know it’s summer when the bedroom refuses to drop to a comfortable temperature even in the early hours of the next morning. With nothing but still, warm air outside, opening a windows does little apart from let the noise and insects in.

At times like these, a portable (floor standing) air con unit can make a real difference to sleep quality and comfort in general. But how much do they cost to run, and what do you need to pay to get the best performance?

The BTU (British Thermal Units) rating of these air conditioners indicates how large a room they can cool. BTUs measure the amount of heat that an air conditioning unit can remove from a room each hour. You can calculate the required BTU of a room using this BTU calculator.

All air con units are big heavy things that use a lot of electricity. When the compressor is running they will draw around 1000w from the wall socket. Bear in mind that the compressor will not run constantly, but only until the room reaches the desired temperature, at which point the air conditioner will just function as a fan until the temperature increases again.

The De’Longhi particularly impresses here, as it can cool a 10-20% larger area compared to the other units, while using the same amount of electricity.

According to this comparison website, the average cost of electricity in the UK is around 14.4p for 1 kWh. While some of the lower priced air conditioners might seem cheaper to run as they only draw 500-800 watts, they would need to run for longer to cool the same area.

Taking a bedroom that requires 5000 BTUs of cooling as an example, the more powerful units will only need to run for a short time, where as the lowest power model might need to run continuously for the whole hour. Factoring in the manufacturers stated power draw and time the unit would need to run the compressor for, as a very rough estimate, the cost to remove 5,000 BTUs of heat from the above room would be:-

* While the above table gives a good measure of the units efficiency, the predicted cost assumes that once 5000 BTUs had been removed from the room then the larger units would no longer consume any power. In reality they would still require power to run the fan and while they’ll remove the heat quicker, they’ll have to restart the compressor once the temperature in the room begins to rise again.

GWP stands for Global Warming Potential. Fortunately none of the air con units here use CFC containing refrigerant that damages the ozone layer. The green house gases produced and effect on global warming depends on the type of gas used and is shown in the table below:-

As you can see, the type of refrigerant has a massive effect on the potential environmental impact. Models that use R290 are the ones to aim for.

The 5000BTU is the cheapest unit here. It also has the lowest cooling power at 5000 BTU although the company also offer an 8000BTU model for around £50 more.

There are three fan speed settings, and the front vent can be adjusted to alter the direction of the airflow. It also has a 24 hour timer.

The relatively low cooling power means it could struggle in larger rooms, but this could in fact make it a sensible choice for occasional use in a bedroom to tame the few hot nights we get per year.

Not the most powerful model here but its 9000 BTU cooling power should be sufficient for most rooms. With relatively compact dimensions of 35.5 cm (W) x 34.5 cm (D) x 70.3 cm (H) it shouldn’t take up too much space either. It offers four modes: Cool, Dry, Fan and Sleep.

The Chilly boasts a large 50 litre per day de-humidifying capacity and the self evaporating system lets it remove the condensed moisture from the unit without manual draining or setting up a hose for continuous drainage.

Another bonus is it’s use of the latest R290 eco-friendly coolant.

Top of the range and premium price, but also has the best energy rating here (A+).

With 11,000 BTU cooling capacity it’s able to keep just about any room at whatever temperature you want. At the same time, its maximum power consumption never goes above 950W, hence the A+ energy rating. It is the heaviest unit here though, weighing 30kg and measuring 44.9 cm x 39.5 cm x 75 cm.

The control panel has an LED display, and allows adjustment of the fan speed, 24-hour timer and temperature setting. It also boasts a condensation recycling system, dehumidifying function and fan-only function.

It only has a 1 year warranty though which considering the price is disappointing as some of the other models here offer 2 years for less cost.

Along with the Inventor Chilly it is the only other model that uses eco-friendly R290 coolant, a natural high efficiency gas which has no greenhouse emissions.

Another stand out feature of this model is that it’s the only one here that also offers a 9,000 BTU heater function as well as the usual cooling (10,000 BTUs) and de-humidifying.

It does have a relatively high power draw of 1085 watts and uses older and less environmentally friendly R410A coolant. These combine to give it the lowest energy efficiency rating here. If you’re looking to cool a large area however, the purchase price could offset this.

While the De’Longhi is significantly more efficient, the MeacoCool MCs lower asking price may mean it actually works out better value if you’re only likely to run it for a couple of weeks per year.

The Trotec PAC 2000 is the second smallest unit here in regards to BTUs. It only offers 7,000 BTUs of cooling but at the same time draws around 200 watts less electricity than the bigger units.

Like most models here it offers 3 fans speeds, a timer and a remote control.

It could be a good choice if you only need to cool a smaller room and just for the odd hot week or two over the summer. If this sounds like you, have a check of the currently prices and you may find the PAC 2000 offers everything you need for the lowest price.