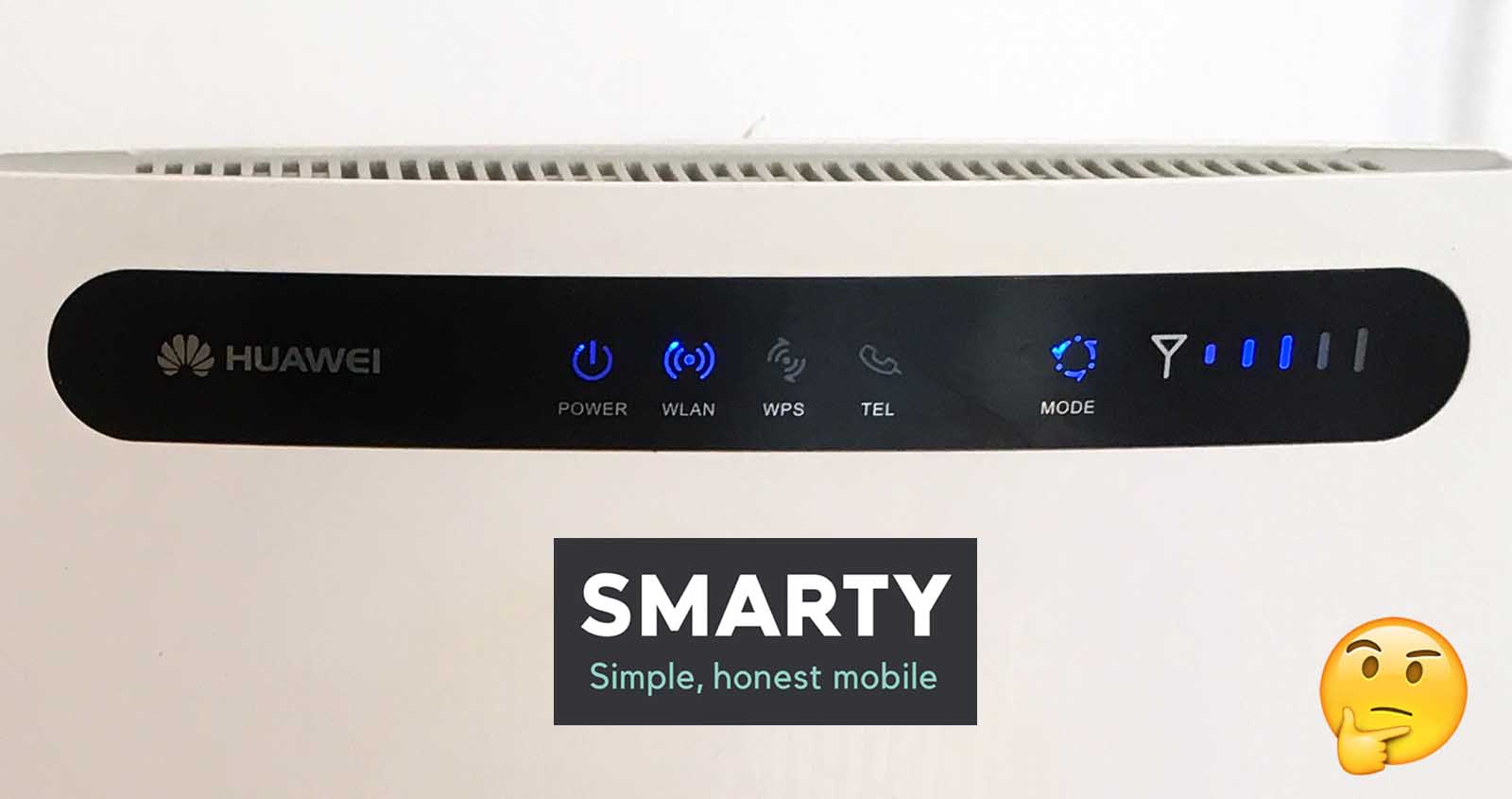 SMARTY currently offer the cheapest unlimited 4G in the UK but when I tried them last year I found the performance very disappointing. Have things improved this year?

As I was using 4G exclusively as my home internet connection, Smarty caught my eye because they offered unlimited 4G data usage for less than I was paying with Vodafone capped to 50GB per month. However back then the connection was often extremely slow and unreliable. I wrote about my experiences in 2019 here.

I kind of hide that article away as I always felt a little bad writing such a negative post, and I suspected the extremely slow speeds I experienced might have been caused by overloading issues local to where I was living at the time.

Now, a year and a half later, I’ve just given them another try having moved to a different town. Were things better this time? Umm let’s take a look…

It’s hard to express just how poor I found Smarty’s 4G service to be. The only time I could even reach into double digit download speeds was in the early morning. Here downloads would average around 15 Mbps (but fluctuate wildly during the test) with uploads around 5 Mbps.

By 8am speeds would drop to at best 2 Mbps and for much of the day would often dip below even 1 Mbps with timeouts lasting several seconds.

YouTube would usually have to drop to 144p resolution and even then trying to open a web page at the same time as playing a 144p video seemed to totally overload the connection causing ping times to exceed 3,000ms and effectively prevent webpages from loading at all.

Personally the unreliability was far more of a problem for me than the transfer speeds. It is extremely frustrating trying to use the internet and finding that sites that had been responding in round 70ms increase for no reason to sometimes 2000 or 3000ms before timing out completely for 10, 20 or sometimes 30 seconds or more.

As can be seen here, the connection was running fine, with reply times around 80ms. Then without warning the request times out. This normally means a reply took longer than 4,000ms (4 seconds) so it gave up waiting.

It then quickly returns back to 89ms before timing out again for what was probably nearly 30 seconds.

Third time lucky we get back to normal but only for around 5 seconds before timing out again!

These sort of time-outs were not disconnections. The router still had a 4G connection but the response time was so slow that webpages would simply give up trying to load.

This would happen regularly throughout the day but was especially bad from early afternoon until mid-evening. Normally after around 9pm I could start to use 4G to watch BBC iPlayer fairly reliably as long as I set the quality to “low”. Still from time to time the video would buffer and I’d see the all too familiar “Request timed out” again.

I’d intended to capture a wide range of screenshots from different speed test sites and servers. However the results were all so pitiful there is little to be gained by going into much detail, but I have included a few examples below.

I primarily tested the Smarty SIM in my everyday router, the Huawei B593, which has maximum 4G transfer speeds of 150Mbps / 50 Mbps (download / upload). The tests were run using the built-in antenna rather than an external antenna as signal strength was not a problem at my location, and could not have been the cause of such terribly slow speeds.

To rule out any problems with my router I also tested in my 2016 model iPhone SE and finally in Huawei’s latest and greatest 5G router, the Huawei CPE Pro 2.

Representing slightly older tech, the B593 and iPhone recorded very similar speeds both in upload and download.

The 5G ready CPE Pro 2 can in theory provide up to around 1,600 Mbps download and 150 Mbps upload in 4G mode and was certainly faster than the far older B593 across the board. But speeds on both routers fluctuated so wildly on SMARTY that I can’t really make any fair comparisons. As can be seen below, even the CPE Pro 2 (the best 4G / 5G router available) could usually only attain single-digit download and upload speeds.

Of the three, the CPE Pro 2 recorded the highest download speeds and achieved the following results when run before 8am…

Again on speedtest.net just before 8am the results at first on the CPE Pro 2 were not too bad but would still fluctuate wildly. The test below were all run with 5 minutes of each other but the upload speed varied by over 50% and the downloads ranged between 7.4 Mbps and 20.3 Mbps (a 270% variance!).

The speeds shown above were the best case scenario and only seen on the Huawei CPE Pro 2 in the early morning. The B593 and iPhone were generally 1.5 to 2 times slower on downloads but uploads were normally around the same across all three.

I was forecast that my location should have a “very good service” and my router did pick up a good signal (usually 4 out of 5 bars).

So, not the absolute strongest signal but in the past I have achieved far higher speeds on other networks despite a significantly weaker signal. Whatever the cause of SMARTY’s problems it wasn’t down to a weak signal.

In late 2020 I found that not only are Smarty slower on 4G than they were a year and a half before, they are now equally as bad in 3G mode too.

The first time I tried Smarty (in 2019), I found that when their 4G slowed to a crawl during the day, switching the router to 3G mode would help enough that the connection was usable, for simple web browsing at least.

This time around I found switching to 3G mode offered no improvement and the only effect was to slow the upload speed a little.

The speeds are not even the biggest issue. A steady 2Mbit connection is fine for web browsing and can stream video fairly well if kept to 480p or below. But SMARTY was unable even to reliably be used for simple browsing due to the infuriatingly frequent timeouts and horrible laggy response times.